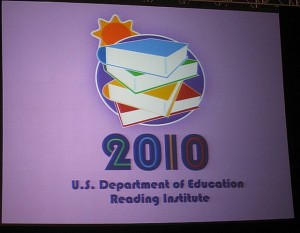 In May, I was installed as the president of the Orange County Reading Association. After being installed as the president, I was given several different binders. As I began going through them, I was excited, yet overwhelmed with the possibilities of what our organization could accomplish in the coming year(s). Although I hope to write a whole post about this asking for your TWRCs, I am including it here because it plays a part in why I have not written a blog post lately. I also got together with several of the area directors for the California Reading Association to help prepare for the upcoming professional development institute on October 15-16, 2010 in Riverside. What a great group of people! I am really looking forward to this institute. Will you be there?

Speaking of institutes, I just attended the United States Department of Education’s Reading Institute in Anaheim. This was the first institute from the United States Department of Education I have attended and I loved it! Not only were the sessions fabulous, but the registration was FREE! I believe the presenter handouts from all sessions will be available on the Internet here. I just checked and do not see them, yet. However, I found handouts from their 2008 institute that you might find resourceful.

During this institute, I asked most of the presenters if I could include the picture I took of them in my blog post and they all agreed. This includes: Irene Gaskins, Maryanne Wolf, Shane Templeton, Alice Thomas, and Stephen Barkley. The three general sessions included: Thelma Mélendez de Santa Ana, Michael Kamil, and Catherine Snow. I look forward to blogging about each of these sessions in the future.

I also went out for drinks and appetizers with the very delightful Susan Ebbers and many of her wonderful blog fans. The time I spent with these folks was absolutely stimulating! It was a real TWRCtank and I treasure our conversation, which mainly focused on vocabulary–the topic of Susan’s phenomenal blog, Vocabulogic. I think we also delighted Joseph Conaty, the Director of Academic Improvement and Teacher Quality, who sat next to us in the restaurant. In his closing remarks on the last day of the institute, he said that one of his favorite parts of the institute was going to dinner and listening to a group of educators still engaged in the topic of the conference–hours after it ended for the day! I admit, it was a favorite part for me, too. I love when people make me TWRC!

Sadly, I did not make it to any of the sessions presented by Susan or the others from this TWRC fest. I am sure they would have given me many more opportunities to TWRC. I also had to miss many other sessions I really wanted to attend. I was limited to six choices, so I had to be choosy. To give you an idea of how outstanding my options were, these are some of the other people who did not make it to my final session choices: Margaret G. McKeown, Nell K. Duke, and Anita Archer. (Note: If you click on Anita Archer’s name, you will find some videos on teaching reading.) I also only chose one of Irene Gaskins and Maryanne Wolf’s sessions (they both presented on two different topics that sounded fascinating.)

**Updated 8/19/2010: Click here for the presenter handouts from the 2010 United States Department of Education’s Reading Institute.